A new report from the Insurance Bureau of Canada (IBC) has revealed that the storm that hit Eastern Canada sometime around Halloween was all trick and no treat, causing millions of dollars’ worth of damage.

Citing CatIQ figures, IBC said that the storm – which affected the region between October 30 and November 01 – caused over $250 million in insured damage.

IBC also offered a detailed breakdown of the total insured damage of the storm event: 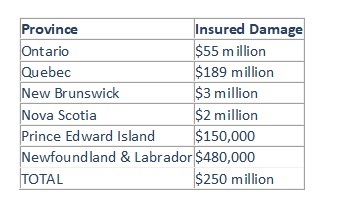 The severe weather event led to significant rainfall and strong winds, which affected most of Eastern Canada. Power outages occurred throughout the region, and nearly a million Hydro-Québec customers were without power due to the storm. In terms of wind and water damage, the Niagara and Montreal areas were the hardest hit, IBC noted.

Heavy precipitation was also an issue due to the storm, manifesting either as rain or snow. Communities in the Eastern Townships recorded the most rainfall: Stratford received 109mm and Sherbrooke 93mm. Montreal and Laval both recorded 63mm, and Quebec City received 71mm. Meanwhile, Val-d’Or and Chibougamau recorded 19cm and 30cm of snow, respectively.

Gusts that exceeded 100 km/h were generated in multiple locations along the shores of eastern Lake Erie and eastern Lake Ontario, IBC said. These gusts kicked up high waves and storm surges.

The strong winds – which also tore down trees, damaged roofs and sidings, and caused road closures – were reported in southern Quebec (up to 105 km/h) and Atlantic Canada (up to 107 km/h). In particular, Port Colborne in Ontario saw a 129 km/h wind gust during the period of the storm.