Much like previous years, severe weather events cost Canada millions of dollars in insured damage in 2019 – despite the lack of a major disaster event that typically accounts for most of the cost, a new report from the Insurance Bureau of Canada (IBC) has revealed.

Citing information from Catastrophe Indices and Quantification, IBC said that 2019’s floods, rain, snow and windstorms led to $1.3 billion in insured damage. This puts 2019 as the seventh highest in insured losses on record. 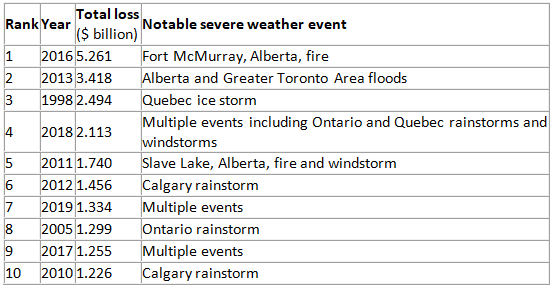 Read more: IBC: Eastern Canada Halloween storm caused more than $250 million in insured damageIBC noted that, just like 2018, no single catastrophe event in 2019 could be blamed for the high amount paid. Instead, a series of significant losses from a host of smaller severe weather events were to blame. Of note, the Halloween storm that affected parts of eastern Canada was the costliest weather event of 2019, resulting in $250 million in insured losses.

Stewart added that the IBC is calling all orders of government to cooperate to reduce Canada’s collective climate risk. He has suggested the creation of a national action plan to address flooding as a first step in that direction.“The cost of climate change to Canadians, their businesses and governments continues to rise,” commented IBC vice-president of federal affairs Craig Stewart.