A pipeline leak that was discovered in British Columbia back in 2007 has resulted in one of Canada’s largest-ever subrogation trial judgments, while also providing lessons learned for the insurance industry when it comes to claims involving sudden and accidental pollution liability losses.

The oilfield in question was owned by oil and gas exploration and production company ISH Energy, which contracted Weber Contract Services to look after the Desan Field on ISH’s behalf for the majority of the oilfield’s life.

Then, in July 2007, the first of five pipeline leaks was found in northern BC. Together, the leaks resulted in environmental damage that required a clean-up, and the pipeline itself also required extensive repairs. ISH alleged in the resulting court case that the leaks were caused by a combination of internal pipeline corrosion and a pressure spike inside the pipeline system while being operated by Weber. Both occurred because of Weber’s negligence in failing to perform maintenance and operate the Desan Field that was contractually-mandated.

“Ultimately, the court decided that Weber not only breached their contract on maintaining the pipeline, but they also caused the pressure spike event,” said Bob Moore, managing director for North America at Charles Taylor Adjusting, a decision that saw the court award ISH more than $24 million in damages for both the clean-up and remediation, and repairs.

This type of dispute is an unusual one for the oil and gas sector, added Moore. The average value of a spill in western Canada involving an oil pipeline is just over $2 million. The remediation of this spill was large, but also involved extensive repairs to the pipeline, which were required to return it to operation, and the repairs were not recoverable from insurers.

Read more: More than 250,000 litres of oil spilled off the coast of NL

“I don’t think I’ve ever seen a case that has an identical set of facts. This one was unique simply because Weber had contracted to complete some of the maintenance, [including] corrosion protection on the pipeline, together with the daily operation of the pipeline,” he said.

The contract itself also allowed for recovery, wherein many of the contract operators would contract themselves out of a responsibility, be it direct damage through corrosion or from an error in the field and the resulting losses. 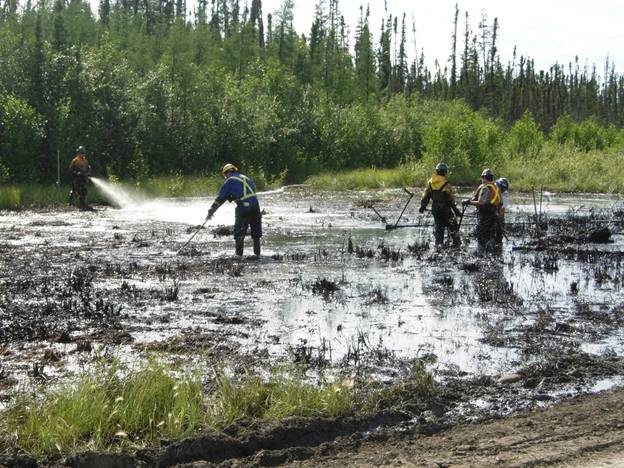 Meanwhile, there were several key takeaways from these events for the various insurance stakeholders involved.

“From an adjusting perspective, it was important to get out there as early as possible. You never quite know what the end result is going to be from these things, so it’s important to preserve everything that’s available so that it’s not lost if it’s needed down the road,” said Moore, pointing to photographic evidence as well as physical evidence, such as recorded data, failed pipes, and gauges that confirmed a pressure spike.

Furthermore, it’s critical to be on-site and understand what’s going on, especially how money is being spent to address the spill and repairs.

“In this case, the insurance policy for sudden and accidental pollution coverage covered the clean-up, but going on at the same time was a fairly extensive uninsured repair to the pipeline,” said Moore, clarifying that most oil and gas companies don’t insure their buried gathering pipelines, and normally corrosion would be an excluded peril under most property policies even if they were insured assets.

“The other thing that comes out of this is that with all that activity on-site, there needs to be a protocol established with the oil and gas company for the proper capture of information for all activity on-site to ensure it is properly allocated to pipeline repairs or clean-up. It’s also absolutely crucial if you’re ever going to get into a subrogation action that there needs to be a paper trail, in terms of all the expenses connected to the event itself.”

Good communication with all of the stakeholders, whether it’s the insured, the insurer, the broker, or the regulators, which play a large part in the monitoring of the clean-up, is important, Moore told Insurance Business.

“It’s also important to, if you think you have potential for subrogation, involve subrogation counsel early, as they look at the process through a slightly different lens and can provide valuable guidance to the insurer, insured, and the adjuster that’s on the frontlines,” said Moore, adding that the broker likewise played a vital role in this situation.

“The broker was key in this particular loss. A good broker will act as an advocate for their client, and this was a particularly difficult circumstance where insurers were facing five leaks in a gathering system, with a complex causal situation and they were able to provide key guidance to their clients along every step of the way.”